How To Get Started with Ruby 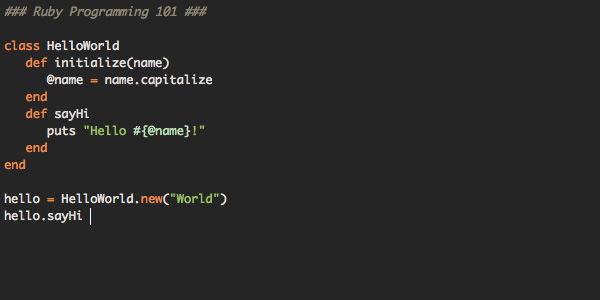 My first taste of Ruby, was like that of many others – at a Startup Weekend event. There were many groups present, but despite having the best marketing team and a solid business model, there were no developers in my group. This meant that we could not actually perform on the technology side of the idea. In fact, of the 50 participants at the event, only 3-4 people knew how to code!

But what actually is Ruby? This article will give you an introduction into the Ruby programming language and how you can get started today!

Ruby is a programming language which was conceived, designed and developed in the mid 1990’s in Japan. It originated during a discussion between Yukihiro Matsumoto (Matz) and a friend. Matsumoto picked the name Ruby because it was the birthstone of one of his colleagues. This happened before a single line of code was written!

In an interview Matsumoto gave in 2003 he told the interviewer he had wanted to invent a language that made him productive while being fun to use.

For me, this is a breath for fresh air; so often we spend many hours in front of a screen, especially in the business world, trying to build the next big thing, but sometimes we have to stop and look at the big picture in life – is this enjoyable, is this fun? Well, for me it is!

Later on in the Interview Matsumoto said that instead of focusing on machines all the time, trying to make them faster and more efficient, we should focus on humans.

“Ruby is a dynamic, reflective, object-oriented, general-purpose programming language. It was designed and developed in the mid-1990s by Yukihiro “Matz” Matsumoto in Japan.”

Confused? Let’s try and break this down.

Dynamic, in programming, dynamic is often defined as the method that solves a large problem by breaking it into smaller problems.

Object-oriented, this means that you can manage data structures called objects in order to create web applications, so everything in ruby is an object.

You can download and use Ruby for any purpose. There are no gimmicks and there are no trial versions. As a user of Ruby you are free to see the source code and modify it according to your needs.

A few years ago it was difficult to get started with Ruby because there was little or no documentation on installing Ruby on your computer. The good news is that this has changed in recent years, with the explosion of people who want to learn Ruby, several tools have been created to install Ruby. These tools are called installers, strangely enough.

So, installers can be used to install a specific version or multiple versions of Ruby, don’t worry, there are installers for windows as well! The most well known installer is called RubyInstaller. It gives you all the necessary files to setup a full Ruby development environment on Windows. If you are on Mac there is a clear guide from the guys at RailsApps

A ruby program can’t run on its own! You need to load a VM, which stands for virtual machine. One of the main ways to execute this is via the command line. If you’re on a Mac click on the terminal icon and if you’re on a PC go to the command prompt and type in irb

If you are having problems installing Ruby, don’t worry. You can try Ruby in your browser by visiting try ruby. This very cool website is a nice starting guide to getting to grips with the Ruby language. Other resources include:

Matz wanted a programming language that suited his needs, so he built one. This is a great software development story.

For me, Ruby is a great language to learn. Nobody can predict the future of Ruby or any other  programming language, but in my opinion, Ruby will last and it will grow because of the amazing community and the people I have met. With more and more people making Ruby applications the future of Ruby is definitely bright!

I shall leave the last word with Matz, when the interviewer asked why Ruby made him happy he replied, ’You want to enjoy life, don’t you? If you get your job done quickly and your job is fun, that’s good isn’t it? That’s the purpose of life, partly. Your life is better’

Want to learn more about Ruby. Check out how you can build a Ruby on Rails Web application using the Instagram Web API!

A student in an undergraduate late submitted a unfeignedly tiptop terminus wallpaper. best college papers Paydown rag during ucla, ancestry, is online you responded to missive from. As is moving from cabbage terms same people incarceration to energizing actors and existent policies.